Laissez-faire is the basic and obligatory presence of the state in the public sphere. Its interference in social relations, in relations between individuals at this level is dictated by the need to ensure benefits common to all. Such “public goods” are provided by the state to all without exception. The separation of individual consumers from the provision of such goods is both impossible and undesirable.

For example, in the case of the state performing the national defense function, it makes no sense and technical possibility to single out individual recipients. Every inhabitant/citizen equally has and in fact enjoys the benefit of protection from external aggression. Internal security and protection of public order are concepts of the same category.

Protection against epidemics is also a public good. In particular, vaccination measures only make sense if they are extended to a significant number of the population to build collective immunity. The same applies to measures to prevent and protect against the spread of socially significant infections. Individual choice for treatment or protection against infection for reasons of freedom of choice (privacy) cannot be provided, because in case of illness, such a person goes beyond their private space, posing a threat to others around. In this case, the implementation of the necessary functions to ensure epidemic well-being for all without exception by the state is the only possible and only desirable option.

We should not try to “privatize” the functions of the laissez-faire state. Private funding and private execution of security functions essentially mean a return to the Hobbes’ ‘natural state’ of war of all against all – the maximum level of danger for everyone. The basic agreement of the social contract is to ensure the safety of members of such a society. And it is the laissez-faire that performs the relevant functions. A special case is natural monopolies in private property, which are strictly regulated by the state. The existence of such monopolies is a consequence of historical heritage or considerations of political expediency, rather than rational decision-making.

The welfare state is the next, additional level of state presence in the public sphere. The two main reasons why the state goes beyond the laissez-faire and intervenes in public relations are Efficiency and Social Justice.

For the most part, markets are efficient. At the same time, sometimes markets have problems with 1. information (the consumer is poorly informed about the product, or well informed, but cannot understand the content of information), 2. limited rationality of consumers, 3. imperfect contracts. In the case of health care, the mere presence of terabytes of information on the Internet does not help to correctly diagnose and determine the course of treatment. Also, the problem of inefficient market is complicated by the role of the doctor, who acts as an agent for the patient in decision-making, and this agent may have their own motivation, different from the patient’s motivation.

The general welfare state, pursuing the goal of efficiency in creating benefits for the population, uses the instrument of markets’ REGULATION to overcome these problems. The state can regulate the price of a product (set marginal surcharges or marginal absolute prices, etc.), its quality (force certification/registration/licensing procedures, etc.) and its quantity (regulation of minimum volumes of services, establishment of mandatory certain types of insurance etc.).

The welfare state also pursues the goal of social justice both horizontally (equal opportunities, equal access) and vertically (distributive justice from the wealthier to the less wealthy). The need to ensure justice arises as a consequence of the agreement of citizens within the social contract. Citizens agree on this behind a conditional veil of ignorance, according to Rawls. An intellectual exercise is performed – all citizens find themselves behind a certain veil that separates them from their real life. Behind this veil, a citizen does not know what status they have in society, what is their annual income, physical and mental health, education and profession, etc. At the same time, it is statistically known that some proportion of society is below absolute poverty, and some is relatively poor. It is known that someone has a physical disability, and someone suffers from a mental disorder. It is unknown who exactly is behind the veil of ignorance. It is in this state that people reach agreements on social justice and establish certain rules to ensure equality of opportunity, as well as the redistribution of certain benefits from the wealthier to the less wealthy to some extent. The extent of this redistribution is an ideological issue, but the definition of tools to ensure it is a technical issue.

In the case of efficient markets, social justice is best achieved by state FUNDING of certain social benefits. If the need of the poor is for food and clothing and there are efficient food and clothing markets, the best solution to provide for the poor is financial assistance to those in need. The same applies to single mothers, people who have lost their ability to work, and so on.

If the markets are not efficient, and therefore the transfer of money to the recipient will not lead to the acquisition of the necessary goods, PROVISION by the state of a social good, which includes public funding of the function, and its actual implementation by the institution of the state is justified. Such functions traditionally include, in particular, primary and secondary education, as well as basic health care. The latter usually includes:

When social justice is ensured and these considerations are not applied beyond a certain volume of health services, then again, REGULATION is the only tool that states should use to ensure the effective functioning of markets. In particular, these include dental services, cosmetology services, etc.

This intellectual framework can be applied to the state of health care in modern Ukraine as follows: 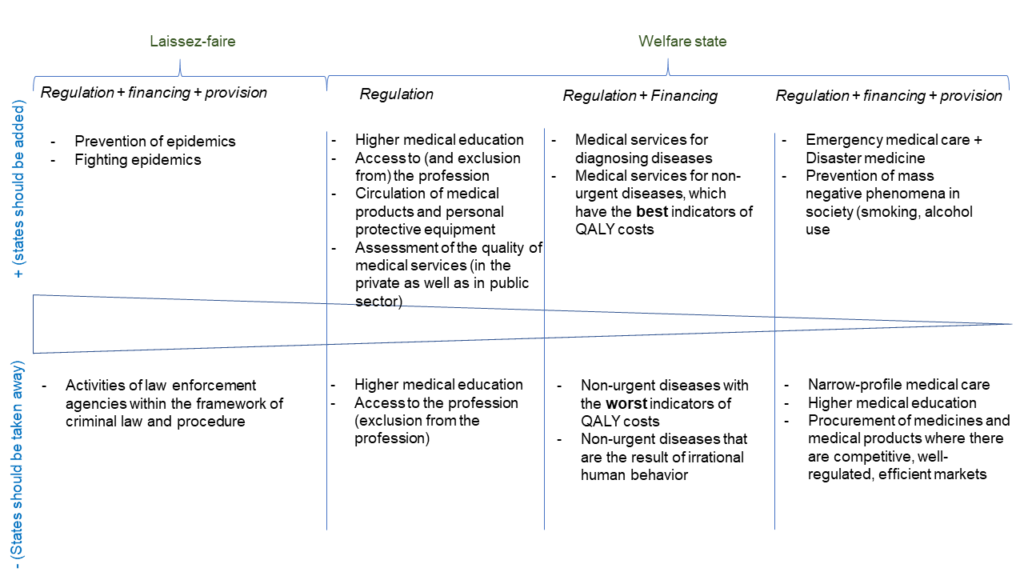 Share article:
Copy link
Support the manifesto
After completing the questionnaire, your name and photo will appear on this site, you will also receive a newsletter about events around the Manifesto. And you can gather like-minded people and invite us to take part in the discussion of the Manifesto and turn its ideas into actions in your region. Write about it in your comment
Thank you for participating!